In the mid 70s, Chaim Koppelman, my late husband and I began making double prints (etchings) of the same objects around our loft. We continued for over 30 years and there are quite a large collection of them: hats, books, solvent bottles, vest, challah, lemons, kitchen cabinet, apples, spool, hammer, arms, legs, bread, eggs, candle sticks, tomato, pipes, paint brushes, tacks, cups, and sundry other objects. We were studying the same objects and we were excited to see how a different vision of the same objects not only made for a richer sight of the objects themselves, but had us know each other better, made our marriage more interesting and deeper.

In a statement for our two person Exhibition of paintings and prints at The Cupping Room Cafe in 2009, we, Chaim and Dorothy Koppelman said:

"We are grateful for the deep and continuing effect on us of our study of Aesthetic Realism with its founder, Eli Siegel. The principle he stated is true; it is what the centuries have waited for: 'All beauty is a making one of opposites, and the making one of opposites is what we are going after in ourselves.'"

My education continues in professional classes taught each week by Chairman of Education Ellen Reiss.  Her scholarship, depth, and kindness as she teaches these classes make for immeasurable gratitude and happiness. 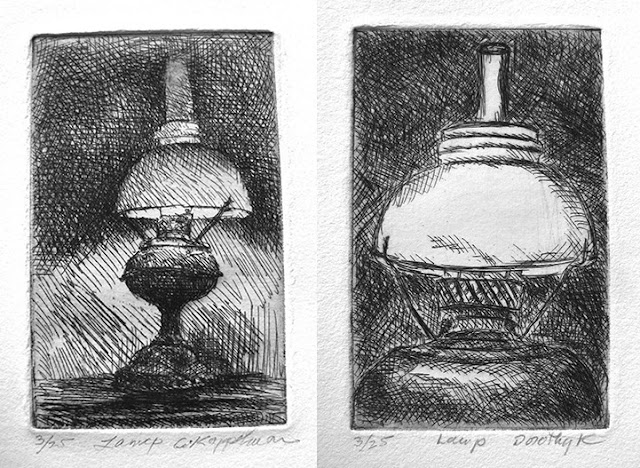 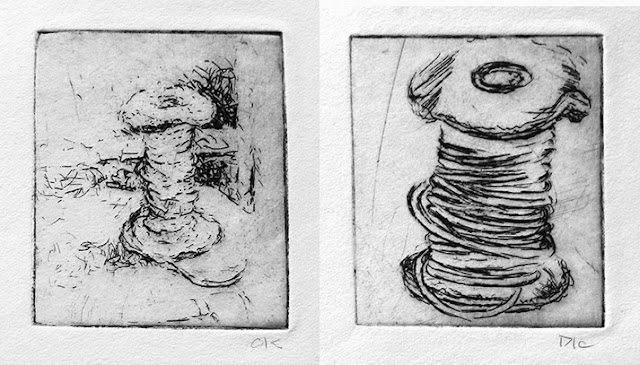 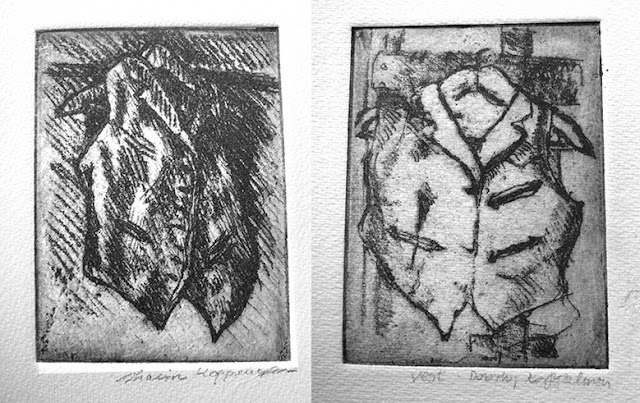 *title is from 2004 article in the Journal of the Print World by Trudie A. Grace

Pastels and prints imagining the emperor in this noted artist's hometown of Brooklyn.

Chaim Koppelman’s work includes two themes of continuing interest to the artist, both related to Brooklyn: Napoleon entering Coney Island, and couples. Koppelman described learning from Eli Siegel, founder of the philosophy Aesthetic Realism, “that in my pieces about Napoleon, I was dealing with the problem of the individual and the democratic. Napoleon, he said, represented the pushing sense of one’s individuality, the emperor in oneself, and also the desire for democracy. I am grateful to Eli Siegel for teaching the enduring criterion for judging what is beautiful in art and good in life: ‘All beauty is a making one of opposites, and the making one of opposites is what we are going after in ourselves.’”

Chaim Koppelman studied art at Brooklyn College, American Artists School, and Art Students League, and from 1940 to 1978 studied Aesthetic Realism with its founder, poet and critic Eli Siegel, and then with the Chairman of Education, Ellen Reiss. Koppelman taught at the School of Visual Arts, where he started the printmaking department in 1959. He was on the faculty of the Aesthetic Realism Foundation from 1973 to 2009. Additional teaching credits include Atelier 17, Blackburn Printmaking Workshop, National Academy, New York University, and SUNY New Paltz. His work has been shown at the Brooklyn Museum, MoMA, the Whitney Museum, and the Museo Napoleonico in Rome, among others. 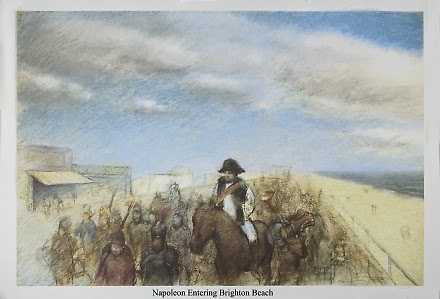 At the Brooklyn Public Library all summer long through September 21, there is an exhibition “Napoleon Comes to Brooklyn” with all Chaim’s prints imagining the emperor in the artist’s hometown.  He is in front of the Cyclone, the Ferris Wheel and with the crowd at Coney Island.

On September 17th, at the BPL, Carrie Wilson and Dale Laurin give a talk: "Napoleon Accompanied."

Edouard Vuillard or, How a Woman Wants to See and Be Seen by Dorothy Koppelman

I have learned from Aesthetic Realism how every woman wants to see and be seen from the time she opens her eyes as a baby; first,—she wants to see the world as it is, because truly seen, the world has a structure which is beautiful. In Self and World Eli Siegel writes:

Aesthetic Realism, in keeping with its name, sees all reality, including the reality that is oneself, as an aesthetic oneness of opposites...

I learned that the only way a person can see the outside world as friendly is to see it wholly as it is and the only way we can like ourselves is to see the aesthetic relation of the world and ourselves.
In Aesthetic Realism lessons I was seen by Eli Siegel not as a disdainful critic, blasé at twenty, but as a woman yearning to like the way I saw the world around me.
I have had the honor of being seen truly by Eli Siegel and I know that every woman wants to be seen this way—as having the opposites of reality itself. He asked me: Are you the same person alone as you are with other people? It had never occurred to me before that such a thing was possible. I learned that assertion and retreat, inside and outside were opposites in the world, and that I could see this in the objects I liked to paint—that it was this presence of opposites that made me want to paint. I wanted to see and to like myself and the world at the same time.
Learning this made my life coherent—that I wanted to see the world all the time in every situation, the way it is seen in the paintings I cared so much for.
This is Eli Siegel’s great principle of Aesthetic Realism: “All beauty is a making one of opposites and the making one of opposites is what we are going after in our lives.”
I believe this statement, embodying Aesthetic Realism, is the greatest seeing the world itself has come to. I have seen it to be true historically about all art, about my own work, and about people,
I am considering the work of Edouard Vuillard as a lesson in paint showing how deeply an artist has looked at women and their lives. The early paintings by Edouard Vuillard put together the opposites in every woman’s life—the intimate and the large, closeness and distance, thought and motion or energy and repose. Vuillard shows how the opposites, the structure of a timeless reality, are present in us and in a work-a-day world; I care for his work and have been affected by it very much. 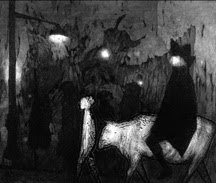 At the Museo Napoleonico in Rome in October of this year, an historic exhibition will open showing the prints, pastels, paintings and drawings which Chaim Koppelman did over six decades on the meaning of Napoleon to him. In the 1950s, as part of his study of Aesthetic Realism, Chaim attended a lecture by Eli Siegel on the character of Napoleon. Referring to a work by Eli Faure, Mr. Siegel explained something never seen before: "Napoleon," he said, "felt the injustices of the past should be changed." Yes, "he had a tremendous desire for power, but also, he wanted to be welcomed by the masses." Chaim Koppelman was so deeply affected by this idea that he put Napoleon into the 20th century, a man of opposites, in New York, in Coney Island, cavorting on the beach. With his fertile imagination, Chaim did work which showed Napoleon in an entirely new way, in entirely new circumstances--a figure with an ego, in his familiar hat, and also a man of the people. Napoleon retreated from Moscow as Meissonier showed, but he then went to Brooklyn, Chaim Koppelman's hometown.

LEGENDS OF THE PRINTMAKING WORKSHOP

AT LAGRANGE MUSEUM, LA GRANGE, GEORGIA
OPENING April 2, and through August 2011
Showcasing the prints of Will Barnet, Bob Blackburn,
Chaim Koppelman and Tom Laidman. These works
were personally selected by Wesley Cochran to show
the pioneering spirit of these innovative printmakers.
A film will be shown of a conversation between Bob
Blackburn and Chaim Koppelman where the artist
talks of the effect of Aesthetic Realism on his work, and
particularly on the print Combat which became part of the
Blackburn collection at the Smithsonian Institution and
is at the Museum of Modern Art.l 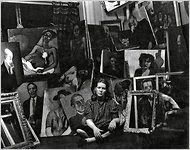 In this much reprinted photo of Alice Neel's studio (recently NYTBR 1-2-11), her portrait of me at age 23 is in the middle right. Alice painted this when she was staying at the studio I shared with Stamos. I was telling Alice about my first Aesthetic Realism Lesson with Eli Siegel. I think what we talked about then made for the quality of the painting.
# posted by Chaim and Dorothy Koppelman @ 1:28 PM

I am immensely pleased to say that Damned Welcome: Aesthetic Realism Maxims by Eli Siegel and drawings by Chaim Koppelman is being republished with a new Foreward written by me.
# posted by Chaim and Dorothy Koppelman @ 1:24 PM